How Do I Uninstall DirectX?

DirectX is a popular framework / software technology used on Windows to help render graphics and play games. This technology is an essential part of the modern Windows system, as since the likes of Vista and Windows 7 have all sorts of new and advanced features (like the “Aero” theme styles). All the new games that are launched and many of the graphical interfaces on the Windows system are achieved using the DirectX API, but it’s also the cause of many problems. If you want to uninstall DirectX, here’s what to do..

DirectX is the technology or software that Windows uses to render the graphics for your computer. It’s now considered an “essential” part of Windows because it’s used by even the most basic of Windows processes to help keep your computer running as smoothly and effectively as possible. However, if you’re having problems with this software, you might want to either uninstall it, roll it back to a previous version of reinstall it completely.

One of the big problems that people face is the “Latest version of DirectX” error. This error is very common for gamers:

This game requires a later version of DirectX

The version of DirectX that is installed on the computer is incompatible with the game. One of the DirectX files was not found.

Here’s what you need to do:

DirectX cannot be uninstalled from Windows.

The system is at a point now where it needs to use DirectX so much that you simply cannot just remove the software from your computer for good. Instead, you should look at either upgrading, reinstalling or rolling back your current version of DirectX.

Reinstalling DirectX is the easiest and most effective way to cure any errors that might be caused by this software and to make sure you have the most up to date version of it. To do this, you must first download the latest version of DirectX from the Microsoft website and then open it up. It will guide you through the installation process and will likely restart your PC as well. It must be noted that DirectX11 is the latest version available as of April 2010.

If you’re getting DirectX related errors because of the game you’ve been trying to play, you should think about reinstalling the game in order to repair all the DirectX components that could be a problem inside it. It’s often the case that games will have a compatible version of DirectX bundled with them, allowing you to install the game with DirectX included. If you want to do this, try uninstalling the game that does not work from your system and then installing it again from the provided CD or installation download.

To do this, click Start > Run > “msconfig”. On the Window that appears, click on “Selective Startup” and then disable all the services that load at boot. This will allow Windows to reboot without loading the DirectX runtime files, which means that you should be aboe to run the game install CD and then make it install a new copy of DirectX without any hassle.

If you really need to uninstall DirectX, there are several tools which claim to be able to do this. What these will do is remove the DirectX files that make the technology usable, and will lead Windows to “roll back” the software to the version that was shipped with your version of the system.

There are various programs which claim to be able to remove DirectX, including DirectX Eradicator which will work up to DirectX version 9.0c and Windows XP. You also have DirectX9 Uninstaller, which is a specific tool that removes DirectX9.0 from your PC. This works up to Windows 2000 and XP as well.

If you are a Vista or Windows 7 user, you will want to use a program that works with DirectX 10 or 11. Currently, there is only a commercial tool which does this called “DirectX Happy Uninstall“. This is a software tool designed to help remove the DirectX runtime files from your Vista or Win7 computer. You can see a screenshot of it below: 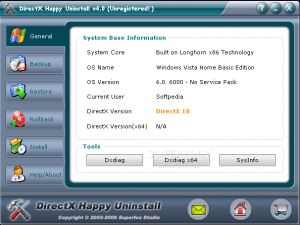 You may wish to try updating DirectX before trying to remove its run time  files with these tools. Often, you can cause significant damage to your system by removing files which it needs in order to run.

Important Note About The Registry

After doing all of this, you need to make sure that your computer is running as smoothly and effectively as possible, and to do that, you should use a ‘registry cleaner’ to scan through your system and remove any of the damaged or corrupted settings that this process might have left behind. In order to do this, you must first download a registry cleaner from the Internet and then use it to scan through your PC and fix any of the damaged settings that are there. This will not only make Windows run smoother, but it will also keep DirectX from having any more problems as well. You can download our recommended registry cleaner below: