How To Fix The Red Screen Of Death!!! 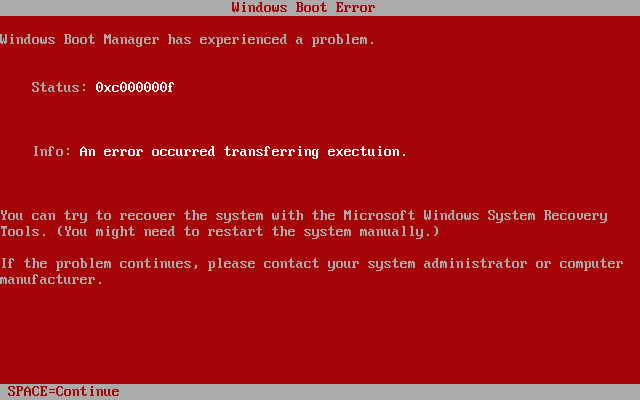 The Red Screen Of Death (or RSoD) error is a rare but damaging error which appears on the Vista operating system. It’s not widely seen but when it appears, it means that something drastic has gone wrong inside your system, and it’s vital that you fix it. This tutorial will show you how…

What Causes The Red Screen Of Death?

The red screen of death has been a typical error in the early versions of Windows, and was designed to show a serious fault with the system itself. Unlike it’s counterpart, the “Blue Screen Of Death”, the red screen error is a very serious problem which can cause your PC to become unusable.

The red screen error was discontinued after Windows Vista and was replaced with variations of the blue screen version… but if you use XP or Vista, then this error can still appear. In these two versions of Windows, the error basically shows you that there’s a problem with the boot loader of Windows, which causes it to become extremely ineffective and unreliable.

How To Fix The Red Screen Error

To fix the “Red Screen Of Death”, you need to follow a simple method. Here are the steps you need to take:

Step 1 – Can You Boot Up Your System?

If you cannot boot up your system, then you need to reinstall Windows. This is done by inserting the installation CD into the CD / DVD drive and then booting from the disc. You can view this Microsoft resource which explains how to do this.

If you cannot boot up your system, the “Boot Loader” for Windows has become fatally damaged. The boot loader is basically a small program which Windows uses to get all of its components into the right order and functioning before it loads and is essential for the smoother operation of your PC. There is no way to fix a computer that cannot boot, apart from reinstalling a fresh copy of Windows.

Step 2 – If You Can Boot Up Your System, Boot In “Safe Mode”

Safe Mode is a famous Windows feature which starts your PC with no extra drivers, components or software. It’s basically a “stripped back” version of your system which you can use to see if it’s the hardware or software of your system which are causing the problems. You should start up Windows in this mode by pressing F8 continuously before Windows starts to load. This will bring up a screen which will show a series of options, including “Safe Mode”.

You should use safe mode and then try doing the things you normally would on your PC. If the errors does not appear, then the chances are that the problem is caused by the software of your system. If the error appears in Safe Mode, then it’s either a Windows issue or a hardware issue. If the problem persists in safe mode, you should first reinstall Windows and if it happens again, you should take your computer to the store to be looked at.

Step 3 – If Your Software Is To Blame…

If your computer works fine in safe mode, then it’s likely that the “software” of your computer is to blame. This is a common problem and can be fixed by using a “Registry Cleaner” program to scan through Windows and fix any of the damaged or corrupted settings that might be causing it to run slowly / with errors. You can download one of these tools from the links below and will fix a variety of the errors that might be causing the Red Screen Of Death. You can download a registry cleaner here.