How To Remove PC Security Guardian 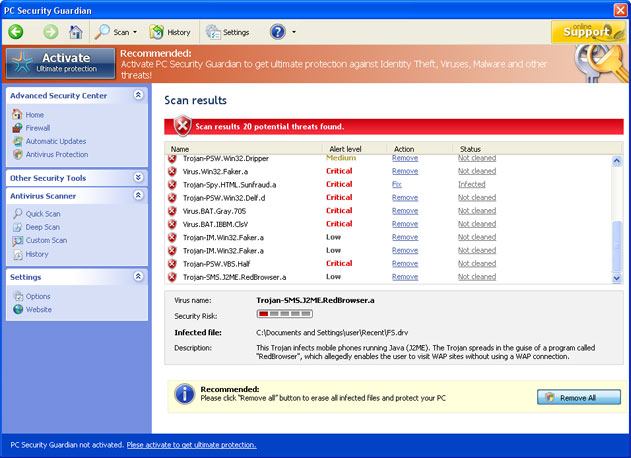 PC Security Guardian is what is known as a Fake Anti-Virus or Malware infection. This particular type of virus works by secretly gaining access to your computer through spam emails, suspicious websites and infected software. Once the infection is on your system, it gets to work immediately by blocking standard computer processes and replacing them with its own malicious processes. This then shows by not being able to carry out simple tasks such as open Internet Explorer or play games. They will then try and get you to hand over your cold hard cash by making you believe your computer is full of viruses and lethal viruses and that they can remove them, which completely bogus and fake.

How Do You Catch PC Security Guardian

These sorts of viruses originate from Eastern Europe, Asia and the Middle East and are created by experienced computer hackers. Once the program has been created it is then dispersed via email lists and websites and Google images which is becoming more frequent. Many people have caught the virus by opening suspicious emails and being unaware that the malware is actually installing itself and dispersing many different files and settings throughout your computer