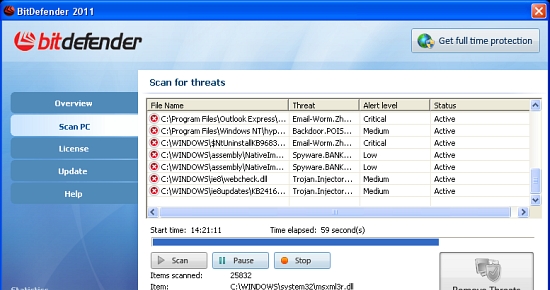 BitDefender 2011 is a newly released virus which has been released by hackers who are trying to get you to buy the fake upgrade to this program. Although this tool look legitimate, it’s a total scam and needs to be removed immediately. If you did not download BitDefender, it’s a FRAUD. The problem most people have is that this program has been designed to trick you into thinking it’s a legitimate application (there is a company called BitDefender), and so you need to be very careful with it.

What Is The BitDefender 2011 Virus?

This is a newly released infections is more commonly known as a “malware” (malicious software) virus. Unlike typical virus infections, which hide away in the depths of your system, BitDefender 2011 & other fake antivirus tools work by showing up on your screen and then trying to con you into purchasing the false upgrade to the program. If you want to remove this infection, you have to first ensure that you’re able to stop it from running before deleting it for good.

We’ve found that BitDefender is nothing more than a scam, which needs to be removed from your PC in the most effective way. To do this, you have to be able to stop the infection from running before deleting the various files it has. This proves tricky for some people because BitDefender 2011 has a habit of blocking many of the programs which are used to stop it, such as Task Manager. Here you can get rid of it properly: